​Sen. Leahy Should Lead on Global COVID Response
Note: Isaac Evans-Frantz, the author, is the director of Action Corps, which organized multiple constituent meetings with Sen. Leahy’s staff in 2020 and 2021, which resulted in Sen. Leahy becoming an original co-sponsor of legislation to help low- and middle-income countries access COVID-19 vaccines and economic support.

Leadership in Face of the Pandemic
Posted May 17, 2020
By ISAAC EVANS-FRANTZ
Explaining the congressman’s role as chairman of the House Foreign Affairs committee, I told the group, “You have more power than you realize to help shape the role of the U.S. in the world.”
I recounted Action Corps NYC’s surprising success in engaging with Mr. Engel on humanitarian matters. 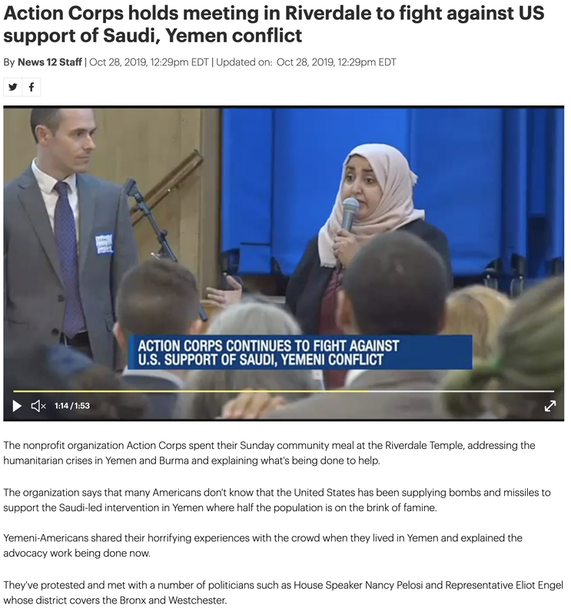 https://www.commondreams.org/newswire/2021/01/26/global-day-action-rep-khanna-renews-support-war-powers-resolution-end-war-yemen
Justice for All Now: U.S.-Backed Saudi War in Yemen -- In Conversation with Action Corps’ Isaac Evans-Frantz and Allied Activists

Reflections on the Grassroots Movement to Stop the War in Yemen
Isaac Evans-Frantz, Director of Action Corps
https://fellowtravelersblog.com/2020/03/26/reflection-on-the-grassroots-movement-to-stop-the-war-in-yemen/
A Moral and Legal Obligation’: 80+ Groups Urge Biden to End U.S. Complicity in Saudi-Led Assault on Yemen
https://www.commondreams.org/news/2020/11/30/moral-and-legal-obligation-80-groups-urge-biden-end-us-complicity-saudi-led-assault
Action Corps’ Isaac Evans-Frantz highlighted action by lawmakers, pointing out that "through the recently-introduced War Powers Resolution, Congress is once again asserting its will to stop U.S. participation in this unconstitutional war."

​The Biden administration, he said, "should stop all participation in the war—including intelligence sharing—and refocus on true U.S. security interests rather than the whims of the famine-causing Saudi dictatorship."

​International Coalition of NGOs Calls on the United States to Immediately Halt Proposed Arms Sales to the UAE
https://pomed.org/international-coalition-of-ngos-call-on-the-united-states-to-immediately-halt-proposed-arms-sales-to-the-uae/

​Conditions in Yemen before the Arrival of the Coronavirus
By David Oppenheimer, Action Corps Rhode Island Lead Organizer
https://upriseri.com/2020-09-02-david-oppenheimer/
Through Action Corps meetings with Armed Services Committee aides to Reed and Langevin in January, to delegations of Rhode Islanders from Action Corps, FCNL, Pax Christi, and RIAC with the foreign policy advisors to the Senators and Congressman Langevin, requests were made that our legislators follow up on any available means to help Yemenis get aid. We specifically asked the advisors to Whitehouse and Langevin to step up and make public statements about the situation in Yemen and to follow up on the path already taken by Senator Reed and directly address the need to lift the suspension of USAID.

​Sadiq Khan urged to boycott Saudi-hosted G20 mayors summit
Rights coalition calls on mayors to withdraw from U20, which coincides with anniversary of Jamal Khashoggi’s murder
https://www.theguardian.com/world/2020/sep/20/sadiq-khan-urged-to-boycott-saudi-hosted-g20-mayors-summit-u20-jamal-khashoggis
The signatories to the letter include Action Corps.

​Mobilizing Muslim Resistance to the Saudi War in Yemen
https://fpif.org/mobilizing-muslim-resistance-to-the-saudi-war-in-yemen/
I had the privilege to interview Jehan Hakim, chair of the Yemeni Alliance Committee and former community advocate for the Asian Law Caucus. I wanted to better understand the inspiration behind the formation of YAC and her thoughts on the Saudi-led war in Yemen, which group members started protesting in 2014 before officially establishing YAC in 2017. The group’s members include over 100 Yemeni-American Muslims, and they’ve forged alliances with progressive and peace groups across the country — including Win Without War, Just Foreign Policy, Action Corps NYC, and Freedom Forward.

In addition to her work as an advocate and educator with the Arab American Association, Somia serves as the chair of the board of Action Corps which is fighting for humanitarian issues around the world.
Support Us